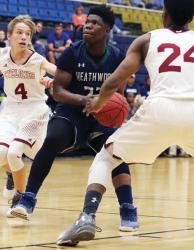 The Porter- Gaud Cyclones jumped out to a 5-0 lead and essentially never looked back beating the Heathwood Hall Highlanders 67-44 in the semifinals of the SCISA 3A boys’ basketball playoffs.

Justice Hill was the top scorer for the Highlanders with 14. Matthew Lee added 13, and Josh Caldwell had 11. Other scorers included Trevor Squirewell with three, DQ Joseph with two, and Isaiah Caldwell got a free throw.

The Cyclones built an early lead with six points each from James and Jackson in the first quarter. Lanford added four. Heathwood Hall countered with a drive from Joseph, and Josh Caldwell had an assist to Hill for a basket, and he sank his own jumper, but Porter Gaud closed the first on a 6-0 run to take a 16-6 lead into the second.

Porter-Gaud pushed its lead to as much as 17 points in the second quarter as Nesmith hit three 3- pointers to go with a layup from Harrison Whatley and a bucket in the post from Lanford. Squirewell hit a couple of free throws for the Highlanders, but Porter-Gaud took a 29-14 into the break.

The Cyclones lead hovered at 17 points in the third quarter until a couple of 3-pointers from Lee helped Heathwood climb within 13, but Porter-Gaud finished the third on a 14-4 run getting seven from Nesmith, an “and one” from Abram Shannon, and layups from Jackson and Dante Smith to lead 52-29 heading into the final eight minutes.

Porter-Gaud’s lead grew as high as 24 points after Denham Wojcik’s free throw. The Highlanders got it down to 20 a couple of times, but they could get no closer, and Porter-Gaud earned a trip to the championship game against Cardinal Newman.