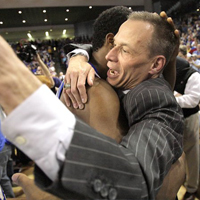 Jordan Clarkson continues to emerge as Tulsa's next big star. His game-high 21 points helped the Hurricane win for the eighth time in nine games.

Clarkson on the game: "This was real big. (Wojcik) works hard, and we go out there and give him all the effort on the court."

Clarkson on what Wojcik means to his career: "He's meant a lot, and he's taught me a lot of things. The biggest thing is he really taught me to become a man. He talks to me a lot not only about basketball, but about things off the court too."

Clarkson, a sophomore point guard, is from San Antonio, Texas. He is TU's leading scorer this season.

Anthony Price had a team-high 15 points, and his turnaround jumper with 2:53 remaining snapped a 64-all tie and gave TU a lead it would not lose.

Price on the game: "It was a close game that shouldn't have been, but we were able to pull it out for our first victory of the season."

Price on what Wojcik meant to his career: "Coach Wojcik always wanted me to strive to do my best and reach my full potential. I think he saw more in me than I did myself, and he would try to make sure I put in a valid effort and not take things for granted."

Price on what he's doing now: "I have my own landscaping business right now (in the Houston area). I'm going into my third year doing it, and it's going well."

Sam Mitchell scored a career-high 15 points to secure TU's first winning season in four years. The Bartlesville native played overtime bloodied and taped up. He needed stitches on his chin after the game.

Mitchell on the game: "That was a hard-fought game, as the UTEP games always are. The coaching staff still gives me a hard time about how (trainer) Chris Nerio had to tape my chin up to get me back on the floor."

Mitchell on what Wojcik meant to his career: "Without Coach Wojcik, I wouldn't be talking to you right now. He was the one who recruited me to play for him. He was the one who believed in me and played me so that I had a career. I just played hard and tried to take advantage of every chance he gave me."

Mitchell on what he's doing now: "Currently I'm living in downtown Tulsa, working at ONEOK where I am a computer system developer. Also I am pursuing some personal training avenues on the side due to the passion my old strength coach Paul Arndorfer instilled in me during my time at TU."

Idlet on the game: "The fact that we hadn't won there in 40 years was a huge accomplishment. We were (in Memphis) for a while with the snow, and we stayed an extra day. It was weird with the travel schedule. We came out with the win, and it was a big deal."

Idlet on what Wojcik means to his career: "Everything. I wouldn't be the player I am today if I didn't come here. (Wojcik's) style of play helped me develop as a player. He's done everything."

Idlet is a fifth-year senior on Tulsa's basketball team. He graduated in 2007 from Prairie Grove, Ark.

Jerome Jordan's shot in the lane at the buzzer completed a 7-for-7 shooting night in the second half and secured a thrilling victory over the Blazers.

Jordan on the game: "It was a good (final) play that (Wojcik) drew up, but UAB locked onto the shooters. Ray (Reese) did a good job getting the ball in before the five-second count. And I got a lucky bounce."

Jordan on what Wojcik meant to his career: "Coach was great to me. He took a chance on me when nobody else would. Since day one, he was honest to me and helped me develop the tools I needed to be successful."

Jordan on what he's doing now: "Right now I'm just learning the ins and outs of the NBA (with the New York Knicks). I'm happy to finally be here on the world's biggest stage. It's similar to my start at Tulsa. So I'm just working hard and waiting for my opportunity."

Justin Hurtt scored a career-high 34 points, after coming off a loss at No. 5 Duke, to spark the Hurricane's late-season run.

Hurtt on the game: "It was one of the most memorable games of my career. It was a game that we needed to win, coming off of a couple of tough losses. I was really feeling it that game, and my teammates found me when I was open. It was just one of those days."

Hurtt on what Wojcik meant to his career: "He really taught me a lot about the game. For example, he taught the importance of the defensive end and leadership. He really cared about my progress and helped me get to this point."

Walls on the game: "It was about being around the guys and focusing on the moment. There are not a lot of players that can be a part of a championship team. Just being there with Coach Wojcik and his first championship game, and that being our senior season, I will remember that forever."

Walls on what Wojcik meant to his career: "I remember the first time I met him. He sat me down and looked me straight in the eye and backed up his words. He had passion behind that. He would push me and wouldn't give up on me. He'd always fight for me. That's all I needed."

Walls on what he's doing now: "I finished up my basketball career after playing overseas for three years. I'm a business representative for Comcast Cable."