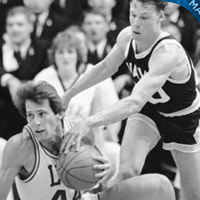 In 1984, the Navy men’s basketball team had put together a 24-8 record –- the most wins in academy history at that time -- but sat back in Annapolis watching the NCAA tournament on television after being left out of the bracket.  The disappointed Midshipmen had not even been invited to the NIT.

The following season, the Midshipmen made sure they would not be disappointed again.  The NCAA Tournament expanding from 53 to 64 teams coupled with Navy’s 25 victories were enough to earn the Mids a No. 13 seed in the 1985 bracket.  The Mids were going to the NCAA postseason for the first time since 1960, and they were certainly going to make the most of their trip to the first round site of Dayton, Ohio.

Paul Evans, who coached Navy from 1981-86, remembers the scene as the Mids walked on to the court for practice the day before they played LSU.

“Back in those days the higher-seeded team practiced just before their opponent,” Evans said. “LSU was coming off the floor and they were just monstrous size-wise. We were walking onto the floor at the same time and it looked like a Catholic junior varsity team coming on the court compared to the size of LSU.”

And while Navy did have some height on the roster with sophomore center David Robinson, who was 6-11 at the time and still growing, players like Vernon Butler, Kylor Whitaker and Dave Wojcik were virtual unknowns despite posting back-to-back 20-win seasons for the first time in Navy history.

“I think one of the things that might have been a problem for LSU was that I don’t think they had any idea how well our kids could play –- I think they just thought they would walk through that game,” Evans said.

The Tigers’ lack of knowledge turned into a huge advantage for the Midshipmen as Robinson, Butler and Wojcik combined for 56 points and 30 rebounds en route to a 78-55 victory against SEC regular-season champion LSU –- one of the biggest first-round upsets up to that point in NCAA tournament history, and one of the most memorable “bracket busters” of all-time.

“The size difference was amazing but it didn’t really bother the kids, and they went out and played very well,” Evans said.

Robinson, an All-American who eventually grew to 7-1 and became an NBA all-star, contributed 18 points and grabbed 18 rebounds in the contest, but was not a one-man show in the game. Butler led the Mids in scoring with 20 points along with nine rebounds, Wojcik tallied 18 points and dished out eight assists, and Whitaker added 13 points in the history-making contest.

“Those guys get overlooked,” Evans said.  “Vernon Butler set every record a year ahead of David.  David followed him and broke the records, but Vernon was every bit as valuable to the team throughout his career.  We also had a kid Kylor Whitaker –- and there was no three-point line at the time -– but if there was, he probably would have been an All-American. He didn’t shoot anything inside that line. And then our point guard Doug Wojcik, who couldn’t shoot a lick, knew how to get the ball to the right people.”

“It wasn’t a fluke,” Brown said after the game. “The points are almost incredible. They totally dominated us. You have moments of embarrassment. That’s what this is like.”

While Navy fell to fifth-seeded Maryland, 64-59, in the second round, the Mids’ entire 1985 starting line-up would return to the 1986 NCAA tournament to make an incredible run.

In the Sweet 16, Navy edged Cleveland State 71-70 to advance to the Elite Eight and a meeting with No. 1 Duke. The Mids’ ride ended with a 71-50 loss to the Blue Devils, but Evans and his players certainly enjoyed the most thrilling postseason run in service-academy history.

“Navy, which is such a big football school, really got behind the basketball team and it really became a priority during those two years,” Evans said.