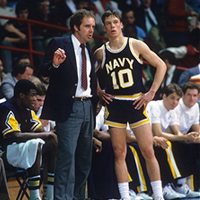 Despite being in the league for just two years, Navy had the second-most players chosen of any team in the league, behind George Mason's four selections. Longtime members Richmond, UNC Wilmington, Old Dominion and Virginia Commonwealth also had three selections each.

As part of its 25th Anniversary celebration in 2009-10, the CAA is recognizing Silver Anniversary teams in 21 championship sports. The teams are selected by a panel of current and former head coaches in the conference.

George Mason became the first CAA school to reach the NCAA Final Four in 2006, defeating Michigan State, North Carolina, Wichita State and Connecticut. Navy advanced to the NCAA Elite Eight in 1986 with victories over Tulsa, Syracuse and Cleveland State. Richmond made the NCAA Sweet 16 in 1988 by beating Indiana and Georgia Tech.

Vernon Butler (Grad. 1986)
Butler was named to the Silver Anniversary Team after helping Navy to the Elite Eight in 1986, the only year he played in the CAA. Second on Navy's all-time career scoring and rebounding lists, Vernon Butler became the first player in Navy men's basketball history to have his jersey retired. Butler, a four-year letterwinner from 1983-86, closed out his career with 1,952 points and 1,115 rebounds after captaining the Mid squads through two of the most successful seasons in Navy history.

Leading the Mids to a 26-6 mark as a junior in 1985 and Navy's first appearance in the NCAA Tournament in 25 years, Butler then guided the Mids to a 30-5 mark, closing out his career against Duke in the East Region finals. A three-time all-conference forward, Butler was a 57 percent career shooter from the field and twice led the conference in rebounding.

David Robinson (Grad. 1987)
He came to Annapolis as a skinny 6-7 freshman from Woodbridge, Va., and an unheralded Osbourn Park High program. He did not start a game as a freshman in Navy's 24-8 season in 1983-84, but jumped the opening tap in the next 99 games, as Navy rolled to 82 wins in those three campaigns. Few players in any era dominated his opponents the way Robinson did.

In four years, Robinson sprouted six inches and his court numbers swelled. He claimed a pair of national blocked shot titles, as well as a rebounding crown and scored 2,669 points in his career, the 21st most in NCAA history. Over his final three years, Robinson scored 2,455 points, averaging 24.8 ppg from his sophomore to his senior season. Before Robinson, no player in NCAA history had scored 2,500 points, grabbed 1,300 rebounds (1,314) and shot better than 60 percent from the field (.613).

Robinson added to his basketball accolades when he became the only American basketball player to play and win three Olympic Games, participating in the 1988, 1992 and 1996 Olympic Games, being a member of the original "Dream Team" in 1992. A perennial All-Star, Robinson led the San Antonio Spurs to the 1999 and 2003 NBA titles

Robinson's lore continued to grow in the NBA, where he was named the league MVP in 1995, Defensive Player of the Year in 1992 and Rookie of the Year in 1990. He and Kareem Abdul-Jabbar are the only two players to lead the league in scoring, rebounding and blocked shots. Robinson is the only player in NBA history to be named to the All-NBA team as well as the All-Defensive team in each of his first seven years. Lastly, he was named one of the NBA's 50 Greatest Players of All-Time.

The 1987 College Player of the Year still owns over 30 different school records at Navy, and was the first overall pick in the 1987 NBA Draft.

In recognition of his outstanding contributions to charity, in March 2003, the NBA renamed its award for outstanding charitable efforts in honor of Robinson. Winners of the NBA's Community Assist Award receive the David Robinson Plaque, with the inscription "Following the standard set by NBA Legend David Robinson who improved the community piece by piece." The award is given out monthly by the league to recognize players for their charitable efforts.

Robinson was then inducted into the Naismith Basketball Hall of Fame on Sept. 11, 2009, as part of argubly the greatest class inducted, and joining legendary coach Ben Carnevale as Navy representatives of the Hall of Fame.

Doug Wojcik (Grad. 1987)
Wojcik did not have the honors as the other 24 players, earning second-team All-CAA just once. However, Wojcik was the straw that stirred the drink for Navy's success in 1986 and 1987. Wojcik is Navy's all-time leader in assists in a career (714), season (251) and game (14, twice). The career and single-season numbers are still CAA records today. Wojcik averaged 7.2 assists per game in his career, a number that still ranks 20th on the all-time NCAA list, and in 24 of his 99 career games, he dished out 10 assists or more.