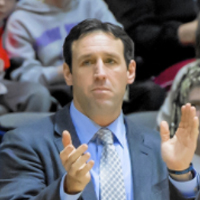 Jimmy Allen was weaned on the Army-Navy rivalry. He is the son of a 1967 West Point graduate who returned to his alma mater as a professor.

Lieutenant Colonel James Allen taught chemistry at the United States Military Academy for 17 years with that tenure sandwiched around a three-year stint as a visiting professor at the Naval Academy.

Jimmy Allen spent the first 17 years of his life living in either Annapolis or West Point and long ago lost track of how many Army-Navy athletic events he attended while growing up.

"Needless to say, my appreciation and enthusiasm for the service academies is very strong," Allen said.

Because of that background, it meant the world when Allen was hired as an assistant at the Naval Academy very early in his coaching career. He worked under a legendary figure in college basketball as Don DeVoe won 512 games over three decades as head coach at Virginia Tech, Wyoming, Tennessee, Florida and Navy.

"It was a great time in my career. I was very fortunate to be able to join the Navy staff when I did because Doug Wojcik and Emmett Davis were there with Coach DeVoe," Allen said. "The program enjoyed a lot of success and I learned a lot from all three of those men. It was a very valuable experience and a really exciting experience."

Allen was the junior member of the staff when Navy earned NCAA Tournament berths in 1997 and 1998. Those teams were comprised of such standout players as Hassan Booker, Michael Heary and Matt Sladky.

Emmett Davis departed following the 1999 season to become head coach at Colgate, a position he held for 13 years. Wojcik left the same year and served as an assistant at Notre Dame, North Carolina and Michigan State before finally getting his first head coaching opportunity at Tulsa.

Davis is now back at Navy as an assistant to head coach Ed DeChellis while Wojcik is out of college basketball after getting fired at the College of Charleston.

Meantime, Allen is midway through his first season as a Division I head coach — at Army West Point of all places. After serving six years as an assistant, Allen was promoted when his former boss Zach Spiker took the same job at Drexel.

"As we studied our diverse and talented pool of coaching candidates from across the nation, Jimmy Allen's name and body of work continued to rise to the top," Army West Point athletic director Euguene "Boo" Corrigan said in announcing the hire. "Jimmy played an integral role in helping lead our program to four straight 15-win seasons for the first time in nearly a century. He is a passionate leader, a dynamic recruiter and a man of great character. We feel Jimmy Allen is the ideal fit to lift our men's basketball program to even greater heights." Allen, who attended West Point Elementary School, saw his life come full circle on the day he was named Army head coach. "This opportunity means the world to me," Allen said. "I feel like West Point has been part of my DNA since I was born. I lived here a couple different times growing up so this is a very special day for me."

On Saturday afternoon before a sellout crowd at Christl Arena and a national television audience on CBS Sports Network, Allen will participate in the Army-Navy rivalry as a head coach for the first time. He was intimately involved with more than a dozen such games during his separate six-year stints as an assistant at Annapolis and West Point.

"It's sometimes hard to explain the emotions that go into it. No matter which academy you are at, everyone is talking about either Beat Army or Beat Navy. It's just such an intense rivalry that is totally ingrained in both institutions," Allen said. "It's a very special opportunity to be able to compete in a game like this. There really are no rivalries quite like Army-Navy. I feel very, very fortunate to have been able to experience it from both sides."

When Allen lived in Annapolis, his roommate for six years was longtime Navy sports information director Scott Strasemeier. They served as best man in each other's weddings and remain very close to this day. Strasemeier is making the six-hour drive to West Point on Saturday in order to see his close friend make his head coaching debut in Army-Navy.

"Jimmy has been around a lot of great coaches and I always thought he had a great basketball mind and would most certainly be a Division I head coach some day. I just wish it wasn't at Army," Strasemeier said. "Jimmy and I lived together for several years and we both have a competitive personality. There is nobody you want to beat more than your best friend. Having him at West Point makes that competition even greater. When you are at Navy you always want to beat Army, but when one of your best friends is the head coach of the other side it makes you want to win even more." Davis and Wojcik were ushers in Allen's wedding and they all still stay in touch. "I met some of the best friends of my entire life while I was at Navy," Allen said.

Davis chuckled when asked if he ever imagined Allen becoming head coach at Army. "Not really, but this profession takes a lot of twists and turns," Davis said. "I think Jimmy did a great job as an assistant coach for Zach Spiker and was very deserving of the opportunity. I was certainly very happy that Boo Corrigan rewarded Jimmy for the job he did there."

Davis recalled that Allen stood out as a talented recruiter during his time at Navy. That ability to attract talent to a service academy is a big reason why he was hired as an assistant at Army then promoted to head coach. "That experience at Navy helped me throughout my career. It helped me quite a bit as head coach at Averett because recruiting at a Division III school is very similar to recruiting at a service academy," Allen said.

Allen oversaw a remarkable transformation at Averett, which is located in Danville, Virginia. He inherited a program that went 0-25 and two years later led it to a 20-win season. Averett would wind up making three NCAA Tournament appearances under Allen, who was named USA South Coach of the Year in 2005, 2007 and 2008.

Allen is facing another rebuilding job at Army, which graduated the most accomplished class in program history. Forward Tanner Plomb, center Kevin Ferguson, swingman Kyle Wilson and point guard Dylan Cox are the first classmates in Patriot League history to all surpass 1,000 career points. Wilson ranks fourth in school history with 2,001 points while Cox is the all-time assists leader and Ferguson ranks No. 1 in career field goal percentage shooting.

"I can't imagine there have been too many classes in the history of college basketball that were that productive," Allen said. "We lost more than any team could possibly lose and we're playing with a lot of young kids."

Army (8-11, 2-5) enters Saturday's showdown tied for eighth place in the Patriot League. Meantime, Navy comes in on a roll, having won four in a row to move into a three-way tie for third place.

"We've had some great wins, some really encouraging progress. Unfortunately, you can't speed up the experience process," Allen said. "Overall, I'm happy with where the program is headed."

Allen believes veteran leadership has been the key to Navy's sudden turnaround.

"When you look at Navy's lineup, one of the things that has helped them is they are playing with juniors and seniors. They have some guys that have played a lot during their careers," he said.