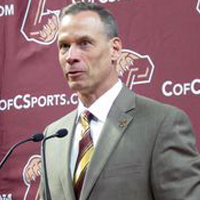 SALT LAKE CITY — “I’m not one of the coaches,” Ken Bone says when a reporter approaches him in the Gonzaga locker room Friday, which is only true in the narrowest, most technical sense of the term.

Bone, after all, has been a head coach for 23 years at every level from junior college to the Pac-12, making several stops as an assistant in between. But with Bone’s career on pause last year, a helping hand from Mark Few brought him to Gonzaga, where there was no official role available but an opportunity to be part of the program in a volunteer, quality-control type of position.

It’s something Few, who is aiming to get No. 1 seed Gonzaga back to the Sweet 16 for a third consecutive year on Saturday against No. 8 seed Northwestern, has created each of the last three years for out-of-work coaches including former Tulsa and Charleston coach Doug Wojcik and former Idaho coach George Pfeifer.

“I just have a soft spot for coaches that lose their jobs or whatever might have happened,” Few told USA TODAY Sports. “By and large, 90% of these guys, 95% of them are great guys, great people, and there’s a void that they have when coaching is taken away. And if they don’t find anything, if we can fill it in some way, get them feeling good and prop them back up on their feet, get some confidence from just being associated with Gonzaga, I think it’s great. And selfishly, I want to pick their brain. I know in all three instances they’ve helped our program immensely.”

Though it’s not unusual for coaches to allow their friends in the business to observe or come to practice if they’re out of work, at Gonzaga they function as full-fledged members of the organization. While NCAA rules limit how much support staff members can work with players on the court, Few likes having another set of experienced eyes to self-scout, critique and offer ideas on how Gonzaga can continue to evolve.

“Mark really likes to help his peers who didn’t have things work out for them,” Gonzaga athletics director Mike Roth said. “If you look at what’s in it for us, it’s somebody else for Mark to talk to and visit with. In Ken’s case, this is a guy who beat us in our own building with two different schools (Portland State and Washington State). We don’t lose many in that building. When he first came in, I was visiting with him and he said, ‘I’m just here to learn how you guys do it and just want to be a part of it, and I said, ‘We’ll learn from you, too.’ ”

Few said he still reaches out once a week to Pfeifer, who resigned last fall from a Division III women’s basketball coaching job to teach middle school, because he regards him as an essential X-and-O sounding board. And last year, Few leaned heavily on Wojcik with the design and planning of Gonzaga’s new athletic facility, which will include practice courts, a nutrition center, academic space and a Hall of Fame.

“Most of his stops as an assistant and head coach he had to redo locker rooms and plan practice facilities,” Few said. “For me, I’m always like, ‘Whatever you guys want,’ but having him there to meticulously talk about some things was great.”

For Wojcik, the opportunity to spend last season with Gonzaga came at a crucial point in his career. In August of 2014, Charleston fired him after allegations he verbally abused players, ultimately paying him a $400,000 settlement in order to avoid a lawsuit.

Though Wojcik, a former Tom Izzo assistant, is highly respected in the coaching business for his defensive system and the rebuilding job he did at Tulsa, the circumstances at Charleston made it difficult for him to jump right back into college coaching.

Wojcik, who has subsequently moved back to South Carolina, said in a phone interview Friday it was an uplifting experience to see Gonzaga’s success from the inside and be a low-profile part of the program who could do anything from shooting the breeze to imparting defensive philosophy to playing pickup games.

“You go from being, in a way, in that lonely isolated position as a head coach a lot of times to having a great banter with guys in the office on a daily basis,” said Wojcik, who cherishes a picture of he and Few embracing on the bench after Gonzaga’s West Coast Conference tournament title last season. It was just a phenomenal year. I can list 25 reasons why the average person would have no clue why they are who they are besides coaching and recruiting. It’s just a unique, unique place, the culture, the whole bit.”

For Bone, who met Few when he was coaching at Seattle Pacific in the late 1980s, this season at Gonzaga has allowed him to keep his family in Missoula, Mont., where his daughter Chelsea wanted to play her senior year of high school volleyball. He intends to coach full-time somewhere next season and has used any extra hours, even this week, talking to people about jobs.

“This is the best of both worlds: I can be part of a great program and great staff — it’s incredible — and just try to grow as a coach and learn,” said Bone, who coached Washington State from 2009-14. “I’m just an extra set of eyes. I’m continually giving them my 2 cents in what I see, and it’s not just X’s and O’s. It’s body language by a player, it’s pace or tempo of the game, just whatever I see as an ex-head coach. I’m trying to help these guys out as much as I can. How cool would it be to see Gonzaga get to a Final Four, potentially win a championship?”

What Bone has taken away most from Gonzaga is the importance of staff chemistry, where everybody knows and accepts their role. Few has been fortunate in that he’s lost relatively few assistants over the years given the program’s success. But that’s also why he values outside voices, even as he sits at 499 career wins going into Saturday’s game.

I don’t go looking for (guys to bring in),” Few said. “I just tell them, if you can’t get anything, if you don’t have anything, there’s a safety net here. Just park it here for awhile on the road of life and hang out. I can’t guarantee you anything and guys I have are going to do their roles, but you’re welcome to do that and we’ll treat you fairly, and with respect.”