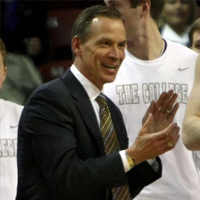 Doug Wojcik could see the genesis of Gonzaga’s run to the Final Four forming a year ago.

The former College of Charleston head coach served as special assistant to Gonzaga head coach Mark Few last season and recognized early that the Bulldogs were built for a Final Four run this year.

Gonzaga will face South Carolina on Saturday (6:09 p.m.) in Phoenix, Ariz., in the first of two national semifinal games.

Gonzaga, one of the most successful mid-major college basketball programs over the past two decades, has been on the cusp of making the Final Four for years. The Zags were 28-8 a year ago and advanced to the Sweet 16.

Despite losing Domantas Sabonis to the NBA draft last June, Wojcik knew Gonzaga had plenty of talent sitting on the bench to fill the void for this season.

Nigel Williams-Goss, a transfer from Washington, and Missouri transfer Jonathan Williams would have been in the Zags' starting lineup last year had they been eligible.

“We saw those guys every day in practice and everyone knew how good they were,” Wojcik said. “I think everyone felt like this team was going to be legit headed into this season. That if things fell into place, they had a chance to go to the Final Four and win it all.”

That was even before Jordan Matthews, who averaged 13.5 points a game at California, decided to transfer to Gonzaga for his final year of eligibility.

Throw in a healthy Przemek Karnowski, who had back surgery and missed the entire 2015-16 season, and Wojcik was confident the Zags could compete with any team in the country.

“They already had a really good nucleus coming back, but when you get a Jordan Matthews and a healthy Karnowski coming back, that’s a team that can play for a national championship,” Wojcik said. “Karnowski was supposed to be a senior last year and no one was sure he was going to be able to play after his back surgery. He’s a difference maker. Having his size and skill in the paint makes them a totally different team.”

Wojcik met Few on the recruiting trail on the West Coast in the late 1990s and had stayed in touch over the years. When Wojcik was fired at College of Charleston in 2014, Few offered him a job on his staff.

“Mark is a great guy and a great coach,” said Wojcik, who coached in a Final Four in 2005 as an assistant coach at  Michigan State. “He goes to the beat of his own drum. He’s a different kind of coach. I think what people don’t realize is how confident Gonzaga is on game day. They just don’t believe they can win, the know they can beat any team. It’s part of their culture.”

Wojcik said the Gamecocks will have their hands full with Gonzaga's post players. At 7-1, Karnowski and the 6-9 Williams give the Zags a distinctive edge over South Carolina in the paint, Wojcik said.

“Gonzaga is an outstanding inside-out, high-low pound-it-inside team,” Wojcik said. “You’re always a much better shooter when the ball is going inside and coming back out, and Przemek is an outstanding passer. They’ve got to establish their post game to get their outside game going and their post-game is where they have a big advantage.”

Karnowski and Williams are not the only threats in the paint. The Zags bring in 7-0 freshman Zach Collins off the bench.

“Collins is another high school All-American that many think will be a lottery pick in the NBA,” Wojcik said. “The depth and skill they have with their post guys is their strength and I’m not sure South Carolina, as good as they have been in the tournament, can match up with their bigs.”

Wojcik said the Gamecocks pressure defense will give the Zags some issues, but that the depth and skill of Gonzaga's post players will be the difference in the end.

“South Carolina has shown that they are a phenomenal second-half team during the tournament,” Wojcik said. “I just think Gonzaga has too many weapons.

"The one area where Gonzaga needs to be concerned about is if they are not shooting well from the outside. If Silas Melson and Josh Perkins are not hitting their shots, then you know South Carolina’s defense is having an effect and they might be in trouble." Michigan State. “He goes to the beat of his own drum. He’s a different kind of coach. I think what people don’t realize is how confident Gonzaga is on game day. They just don’t believe they can win, the know they can beat any team. It’s part of their culture.”