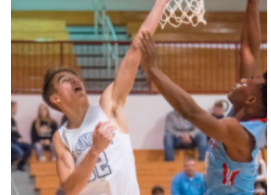 WHEELING — Paxson Wojcik has worn a lot of hats this week. (Source The Intelligencer: http://www.theintelligencer.net/sports/top-sports/...)

On top of being a member of the nation’s number one ranked basketball team at La Lumiere, he has served as his team’s unofficial host for the weekend at the 10th annual Cancer Research Classic.

Makes good sense since Wojcik is so familiar with the greater Wheeling area.

Wojcik is the son of Wheeling Central graduate Doug Wojcik, who most recently was an assistant coach at Gonzaga last season.

“It’s awesome being able to be back (in the Ohio Valley),” Wojcik said. “With my dad and uncle (Dave Wojcik) being kind of sports stars here growing up, it’s cool to be able to play in their hometown in such a great event.”

When the La Lumiere schedule was announced, Wojcik admitted the CRC jumped out at him.

“I definitely circled this weekend on the schedule,” Wojcik said. “A great event in a familiar city. I’ve told my teammates how awesome Oglebay is and told them to enjoy the entire experience.”

Wojcik — a sophomore — is in his first season with the La Lumiere program, which is based in Indiana. He spent last season at Gonzaga Prep in Spokane, Wash. when his dad was on the coaching staff.

“I love my teammates and the school,” Wojcik said. “It’s like a brotherhood. It’s great being 15-0 and ranked number one, too. We just hope to keep it going.”

Unlike many of his games, Wojcik had several familiar faces in the crowd, including his dad, who made the drive from Charleston, S.C.

“You don’t get many games where you have family or people you know, so it’s nice to be here,” Wojcik said. “I had my grandparents and an aunt there.”

The decision to attend La Lumiere wasn’t a tough one for Wojcik. It offers both high level basketball and academics.

“My family and I made this decision for all of the right things,” Wojcik said. “I’ve realized that school and basketball are the two most important things to me, so we sat down as a family and talked it over.”

Being away from home — at a boarding school — could be tough for a 16-year-old, but with as many times as Wojcik and his family have moved as his dad pursued different coaching opportunities, it’s become a familiar ordeal.

“I was born in South Bend and I’ve lived in Michigan, Tulsa, Charleston, S.C., and last year Spokane, so I’ve gotten used to moving around a lot,” Wojcik said. “That’s really helped to make the transition (to boarding school) easier for me.”

“I’ve known Coach Heirman for a while because of his relationship with my dad,” Wojcik said.

Wojcik, who owns a scholarship offer from Columbia and is garnering other Division I interest, is seeing playing time with the Lakers. He started Friday’s victory against Cleveland VASJ and scored two points.

He fully understands the process of recruiting and playing time and is remaining patient.

“I’m not a top player right now, but (practicing) against these guys every day and getting stronger, I’m getting better,”Wojcik said. “It’s nice to have an offer and I am just looking forward to seeing where the recruiting process takes me in the next couple of years.”

Wojcik admitted that it’s beneficial, but also tough being the son of a former Division I head coach.

“My dad definitely has some stuff to say (after games),” Wojcik smiled. “It’s hard at times, but he’s always been patient with me and not too hands on. He’s told me that if I want to be a player, I need to have the desire and put the time and hard work in. He’s always willing to help.”

Paxson’s not the only member of his family who is enjoying success in prep basketball. His cousin, Jake, has verbally committed to Siena. He plays at Bellarmine College Prep in San Jose. His father, Dave, is the head coach at San Jose State.