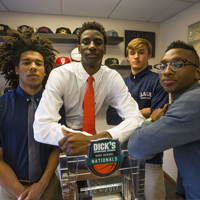 LAPORTE, IN – Situated in a state where a certain sport is religion, one high school boys’ basketball team has to find different ways to worship.

LaLumiere, a private prep school of 230 students located in a wooded area shy of the Michigan state line, has no affiliation with the Indiana High School Athletic Association. So while the rest of the state’s teams are working through its early-season schedule, conference contests and, ultimately, the be-all, end-all class basketball state tournament, LaLumiere crisscrosses the country, playing high-level tournament games against equally high-level opponents in Arizona, South Dakota, Tennessee and West Virginia.

For three days in late March and early April, LaLumiere, and a chunk of its student body, many of whom made the 660-mile trek by car to watch their classmates, were in New York City at the Dick’s Sporting Goods Nationals, a tournament of eight teams, seven of them private, to decide a national champion.

Winners of three games in three days at Christ the King High School in Queens, the top-seeded Lakers, who opened the year ranked No. 1 and finished 29-1, took back to LaPorte County a trophy large enough and heavy enough to cause some serious damage. They received a police escort into campus, were honored by LaPorte mayor Blair Milo and recognized at the state capitol in Indianapolis.

Capturing the school’s first-ever national championship was a big story, but what about the stories behind the story? Following is a look at six individuals who helped make LaLumiere’s dream season a reality.

How does a Cedar Rapids, Iowa native living in Nashville wind up at a prep school in Indiana? In the case of sophomore Tyger Campbell, mother knows best.

“My mom came here and visited and really liked it,” said Campbell, the 6-foot point guard with the unique hair-do who was the catalyst for a lot of what the Lakers did on the basketball court this winter. “When she told me that she wanted me to go to school in the middle of the woods all by myself, it was hard at first, but it’s worked out.”

Campbell balked not because of the idea of being seemingly in the middle of nowhere – it’s a 15-minute drive to the grocery store in downtown LaPorte and a little over 40 minutes to South Bend – but because he’d have to mesh his game with guys who were just as good and sometimes better. Campbell acknowledged that in Tennessee, he was “the man” as a freshman. At LaLumiere, there are four or five or six guys who can be classified as such.

That’s not always easy to embrace. Campbell eventually made it look like it in averaging 11.3 points and 7.8 assists with a ridiculous 6-to-1 assist/turnover ratio. There was a time when Campbell couldn’t wait to leave LaLumiere. Now, as college interest in him and his game grows, he can’t wait to develop his game over the final two years at the place. He’s learned to do his own laundry. To study with better focus. To manage his time when he often has little of it. To grow up.

“You’re going to grow as a man here,” he said. “It gets you ready for college. This place is one big family.

“Everybody’s got your back.”

Jackson tossed and turned and turned and tossed in his midtown Manhattan hotel room that Friday night in late March. He paced the tiny perimeter. Looked down at the sights and listened to the sounds on 42nd Street. He watched TV. He took a shower. He tried any way to pass the time and couldn’t wait to play.

The Michigan State-bound talent who may spend as much time in East Lansing as he did at LaLumiere (one year) then went for 17 points and four rebounds in a 70-52 victory over the No. 3 seed.

Consider it a lesson learned. It was LaLumiere’s 29th win, yet the 6-11 Jackson can’t help but think had he been better in mid-January, that number would have been a nice, round 30.

Jackson, who averaged 18.2 points and 10.1 rebounds a game, still shoulders the blame for LaLumiere’s loss this season to Sierra Canyon (Calif.) High School at a showcase game in Springfield, Mass. Earlier that day, Jackson was chosen one of 24 McDonald’s All-Americans. The highest prep honor moved him. Deeply. And not in the best of ways.

“I just don’t know if my head was there that day,” he admitted. “I wasn’t in the right competitive head space. I wasn’t there.”

Jackson was, but he wasn’t. He was hyped being named a McDonald’s All-American along with teammate Brian Bowen. But he didn’t know how to properly channel those emotions. Feeling happy about the honor, he floated through the first three quarters before finally flipping the switch in the fourth and dominating the game in ways that made him a Top Five college prospect. But it was too late.

For Jackson, there was no other option in New York but to win. At Park Tudor High School in Indianapolis, he won as a freshman. He won as a sophomore. He lost the state championship as a junior. Like with this year’s regular-season loss, it stayed with Jackson.

A collection of baseball hats representing various colleges that LaLumiere players have signed with sits on two rows of shelves behind the desk of fifth-year coach Shane Heirman.

But it was something in front of him, something he made sure he HAD to look at every day in his office tucked inside the main building on campus that drove Heirman through the 2016-17 season. Motivated him through the team’s 5:30 a.m. offseason conditioning runs at Warren Dunes State Park. Focused him to make sure another three-hour practice inside the team’s barn-like auxiliary gym was a success.

There, on the floor of Heirman’s office sat last season’s national championship runner-up trophy, the one awarded to the Lakers after losing to Oak Hill (Va.) Academy on a buzzer-beating tip. Seeing it every day stung.

“You wanted that pain,” Heirman said. “It was at the forefront of everything we did this year. That was the mindset every single day – getting back there for some redemption.”

Given LaLumiere’s sustained success, Heirman knows colleges will come calling – and they already have – with prospective job offers as an assistant. He may make that move down the line, but there remains some unfinished business at LaLumiere, even with the hardware.

“It goes back to our culture of having people who are willing to sacrifice and commit to it and sustain it and understanding what it takes to be successful at LaLumiere,” he said. “It’s really unique.”

It didn’t matter that he had his older brother on campus to lean on for support when times got tough, and they do get tough for everyone that first year away from home. Guard Isaiah Coleman-Lands wanted out of LaLumiere as a freshman.

“This place is not for everyone,” said Coleman-Lands, an Indianapolis native whose older brother, Jalen, is at Illinois. “There’s times when you doubt yourself when it’s cold and the season hasn’t started and there’s not too much going on around here. Everyone is down and depressed a little bit.”

Four years later, Coleman-Lands leaves LaLumiere part of a senior class that won a school-record 106 games to only 11 losses. Next stop for the 6-foot Coleman-Lands, who averaged 9.4 points, 4.5 rebounds and 2.9 steals per game, is Miami (Ohio).

“When you go here, you know that a lot of this is about your future,” he said. “It’s not about what’s going on right now and the struggles. If you want to come here, you’re invested. And I was invested.”

Even freshman year when Coleman-Lands roomed with a student from China. The two had nothing in common, didn’t speak the same language, didn’t have any reason to connect. Eventually, they found common ground. There was no choice.

What did Coleman-Lands take away from that relationship?

“He was a big snorer,” he said. “He was a big dude. A funny dude. It was crazy and fun to learn about his culture."

At a time in a teen’s life when all that matters is how to milk the most out of a day of video games with his buddies, sophomore Paxson Wojcik was thinking out of the box.

Way out of the box.

A left-handed guard whose father, Doug Wojcik, played at Navy before college coaching stops at Notre Dame, North Carolina and Michigan State as an assistant, and Tulsa and College of Charleston as a head coach, the younger Wojcik first started thinking about attending prep school in eighth grade.

“I’ve always talked with my parents about sacrifice, and it was a sacrifice to come here,” the 6-4 Wojcik said. “But the year that I’ve been here has been great. It’s been awesome.”

Wojcik landed at LaLumiere, in part because his father coached Heirman at Tulsa. LaLumiere felt like home, but he missed home back in South Carolina. Missed his parents. Missed his younger brother, Denham, who played this past season on the varsity of his high school team as a 14-year-old and helped win a state championship.

As can be the academics. On days they didn’t play, the Lakers had mandatory two-hour study halls every night. Days before scheduled road trips, Wojcik and his teammates made sure to message or meet with their teachers to stay up-to-date on their assignments.

“There’s a bunch of other places where academics might be a second priority,” Wojcik said. “Here, school comes first and the community comes second and then basketball.”

The head of school

Had there not been a family connection to LaLumiere, Adam Kronk might well still be running the Deloitte Center for Ethical Leadership at the University of Notre Dame or serving as Chief Operating Officer for the Center for the Homeless in South Bend or teaching in Cambodia.

But Kronk married Heirman’s older sister, Jacqueline. One day years ago, the couple visited Heirman when he was the assistant at LaLumiere. The day changed his life.

“It was just 'Go support your brother-in-law and watch some basketball,'” he said. “Little by little, I fell in love with the place and thought this would be an amazing place to devote my life to. I didn’t think that would ever be in the cards for me.”

Now living with his wife and their three boys in a house on the edge of campus and finishing his first full year as head of school, Kronk will help set the course for LaLumiere’s future. Thanks to the exposure that comes with winning a national championship, the boys basketball program likely will play a big role. But never the biggest role. That’s not how LaLumiere was built.

“There are some boarding schools where it’s mainly the sport and there’s some academics,” Kronk said. “They’re doing it where it’s sport plus school. We do it where it’s school plus sport.

“I care that it’s possible to win at this level that we did and still maintain our standards.”