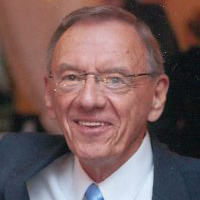 He was born April 15, 1937, the son of the late Henry and Helen (Gostyla) Wojcik. Frederick was a member of the Cathedral of St. Joseph, the CCHS Knights of the Round Table and a U.S. Army Reserve Veteran. He was a 3 sport athlete at Wheeling Central Catholic High School and a graduate of West Liberty University. A mainstay of life on Wheeling Island for the last 58 years, and in particular, the northern end of Belle Isle, he coached many “Island Rats” in basketball at the Blessed Trinity School and was a fixture at the Island baseball diamonds, fields, and basketball courts, supporting his sons and the Island community in general. A lifelong Notre Dame fan, he reared his children on the Irish and supported Central Catholic High School athletics for 62 years. Fred was a devoted husband, father, and Catholic.

Family and friends will be received Wednesday, February 1, 2017 from 2-4 & 6-8 pm at Altmeyer Funeral Home, 1400 Eoff Street, with a Rosary service at 7:30 pm. A Mass of Christian burial will be held Thursday, February 2, at 8:30 am at the Cathedral of St. Joseph. Interment will take place at Mt. Calvary Cemetery.

Memorial contributions may be made to the Central High School Boys’ Basketball Team by clicking here.

Condolences may be offered to the family at www.altmeyerfuneralhomes.com.